The Newfoundland Beer Strike of 1985

In 1985 the three major breweries in Newfoundland, Labatt, Carling O’Keefe, and Molson, stopped producing beer. For most of the year, from April until mid-November, there was no commercial beer produced in Newfoundland. Those who lived through the beer strike seem to remember it as a shared trauma or as what the poet and storyteller Ben Ploughman called a collective “hangover,” but for many of us from a younger generation these stories are not at all clear.1

The story of the 1985 beer strike lives on in local legend, but there isn’t really any clear account of what actually happened in 1985. I’ve heard the basic chronology from my father: the breweries went on strike, the liquor board imported American beer – which everyone hated – and, once the strike was resolved, all the American beer was discounted to a ludicrous degree. This isn’t actually too far from what happened, however, I’d like to iron our a few details.

The strike started at the Labatt brewery where unionized workers, protesting the introduction of aluminum cans which they felt threatened their job security, went on strike on April 1.2 The following day O’Keefe and Molson locked out their workers (O’Keefe had about 70 and Molson had about 60) in accordance with an agreement between the three breweries. So, because of this agreement, workers at all three major Newfoundland breweries were either locked out or officially on strike by April 2, 1985. 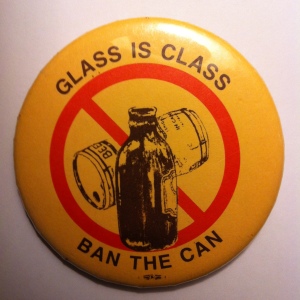 “Glass is Class, Ban the Can,” Union Badge

The other unions, the ones who were locked out due to covert corporate agreements, were actively frustrated by this action. Kevin Walsh, the president of Local 354 of the United Brewery, Flour, Cereal, Soft­drink and Distillery Workers union, took part in an occupation of the Carling O’Keefe plant in downtown St. John’s in early May. He stated, upset at the lack of official reasoning for the lockout, ”We want to sit down at the negotiating table and work out an agreement.”3 The cause of the strike was not simply a union issue, it had to do with the limited competition in the Newfoundland brewery market and corporate solidarity.

By May many local pubs and taverns were running low on beer supplies. Steve Sparkes, the president of Hospitality Newfoundland, told the Globe and Mail on May 11 that within ” maybe 12 or 14 days… every bar will be out of beer,” and that “[p]eople just haven’t switched to liquor as we had hoped.”4 The solution to the beer shortage was one which many Newfoundlander’s came to abhor: importing larger quantities of American beer.

Ben Ploughman, in his poem “The Beer Strike of ’85,” calls the beer alternatives provided by the Newfoundland Liquor Corporation (NLC), canned beers like Lone Star, Old Milwaukee and Pabts Blue Ribbon, “American froth.” He laments that beers, even Canadian and Dutch ones, like Heineken, Mooshead, and Schooner, just could not “satisfy the thirst / That had plagued this Newfoundland.” Nothing it seems, was as good as Dominion or Blue, his preferred two brands. (I’m uncertain if “blue” is referring to Blue Star or Labatt Blue, but, given the nationalistic context, it would likely be Blue Star.)

In the first four months of the strike/lockout overall beer sales dipped 20 per cent from the previous year and the NLC imported “36 million bottles or cans of beer from the United States and 8.4 million cans or bottles from Europe.”5 Newfoundland was not the only provence struggling with brewing industry labour problems in 1985. There was also a lockout of Ontario’s three major breweries in March of 1985 because of similar union fears that cans would both displace workers and allow for greater beer mobility and centralization.6 These fears of greater brewery centralization also appeared in the Newfoundland strike. Fraser March, president of the Newfoundland Association of Public Employees, stated in a 1985 press conference that: “I believe that the brewing industry has a secret agenda in this province and that secret agenda is to pull all breweries out of Newfoundland and have beer brewed in large regional breweries, one in Halifax and one in Montreal for sure, and have all beer sold in non­returnable cans.”7

The portability of cans seemed to offer a greater ability for breweries to centralize and streamline their production. Because cans could be shipped long distances, unions feared that breweries would move out of a small, regional production model and towards a larger centralized one. In many cases this seems to have happened in the years since 1985, however, notably Labatt and Molson both still operate breweries in Newfoundland and still mostly use the regional Newfoundland semi-short-neck bottles.

Aside from impacting our ideas of canned beer, the strike also raises an interesting point about beer brewing in Newfoundland. Ploughman, in his poem about the strike, writes: “And such the likes were never seen / Of homebrew that was brewed, / From herring barrels and plastics pails / So thick as Irish stew.” It’s interesting to think about what a beer strike and an influx of cheep, poorly received American beer did for the homebrewing movement in Newfoundland. It’s also interesting to think about how almost a year of American imports might have shaped Newfoundland beer tastes, which still tend to favour lighter beers.

The strike/lockout ended in November when the union and Labatt came to an agreement after a 22 hour bargaining season.8 Beer sales had plummeted 15% over the previous year – a drop of almost $15 million dollars. The remaining American beer was discounted to, according to Ploughman, nine-sixty, but apparently sales were still slow. Ploughman continues:

Now what was the government to do
With thousands of leftover froth,
It was decided to hit rock bottom
Six dollars for the rest of the lot.

So us Newfies gave in once more
One final crack at those can of beer,
It was cheeper than a pepsi or coke
We called it `hangover beer of the year.’

The beer strike/lockout of 1985 is an important historical event in the history of Newfoundland. It deals with corporate collusion and market control in the beer industry, union responses to changing labour practices and technologies, beer preferences and brand loyalties, and perhaps even played a part in the growth of a homebrewing tradition in Newfoundland. For those of us too young to remember the strike, let’s be thankful that there are more local options now than ever before and hope that a drought of local beer in Newfoundland will never happen again.

4 “Across Canada: Newfoundland taverns are running short of beer,” The Globe and Mail, May 11, 1985.

2 responses to “The Newfoundland Beer Strike of 1985”