This blog was started with the intention of unravelling the histories of some of the corner store favorites of Newfoundland beer drinkers. The thing is, I’ve been looking at the traffic that I’ve been getting on this site and I’ve noticed something: there are a lot of non-Newfoundlanders interested in our beer brands. That’s great news, but, unless they have access to a Marie’s Mini-Mart, they don’t really know what the beer scene here is all about. That’s what this page is all about, an introduction to Newfoundland Beer Brands.

Before I talk about these beers I should note that this is just about the brands made by Molson and Labatt. If you are interested in the other brewers in Newfoundland, the craft brewers and brew-pubs, then check out Quidi Vidi Brewing (posts), Storm Brewing (posts), and Yellowbelly (posts). Or, if you want a quick tour guide you can read our’s here.That’s all the craft beer in the provence! If you’re looking for “real ale” (cask ale) or anything that keeps up with North American Craft beer (or even a year-round IPA), you’re going to have to wait a few years.

This post is intended as an introduction to the old Newfoundland Beer Brands, what I like to call “nostalgia marcos.” They are beers brewed by the big brewers (Molson and Labatt) but that throw back to an older brewery or brand. This is not unusual in the brewing world. Latrobe Brewing, known for their Rolling Rock lager, is a brand belonging to Anheuser-Busch InBev. Alexander Keith’s is Labatt’s. Even Labatt’s beer (like Blue) are really a brand of Anheuser–Busch InBev, so there are a lot of what historians call “invented traditions” in the beer industry. Brewers, big and small alike, like to connect their beer drinkers with the long history of beer brewing.

In Newfoundland these nostalgia marcos are legendary. There are five remaining brands (two beloning to Labatt and three belonging to Molson) and almost every Newfoundlander you will ever meet will have one that they champion over the others. If your here visiting it might be worth trying some of these beers, but if your a visiting beer geek I doubt you’ll be impressed (these are brewed by the big brewers). On to the beers!

There are five traditional Newfoundland brands still being brewed: Bennett Dominion Ale, India Beer, Black Horse, Blue Star, and Jockey Club. In terms of taste and apparence they are pretty close and they are all, pretty much, fizzy yellow lagers. They come in 6 and 12 packs of semi-longneck bottles (about in inch shorter than mainland longneck bottles) which are all twist off. Blue Star, Jockey, and Black Horse all have their own printed caps, with Jockey having two different logos on the cap (either the Horse or the beer name), while India and Dominion simply have Molson caps.

Bennett Dominion Ale is a Molson product, brewed out of their St. John’s brewery. While it is listed as an ale, there is little of the ale taste that an American or Brit might expect. Ales are usually fermented at a warmer temperature than lagers, giving them a bigger taste, but, and this is speculation on my part, as Molson only produces lagers at the Newfoundland brewery, I suspect that this brewed at only slightly warmer temperatures than any other beer they produce. The great Michel Jackson once wrote that “Newfoundland is particularity proud of its full-bodied local beers, which tend to be darker and heavier and more bitter than elsewhere,” yet he puzzled at the notion that “the much-vaunted Dominion Ale” was “in fact, bottom-fermented” (The World Guide to Beer, Prentice-Hall, 1977, page 201), so there are conflicting accounts on this “ale.” Bennett, as discussed on the main page of this project, was bought by Carling-O’Keefe and when Molson took over Carling the Bennett brands came with them. It’s really nice to see that the name lives on in this beer “for Newfoundlanders only.”

Molson also brews the beer that was all the rage in the downtown music scene a few years back, India Beer. This beer, which is NOT an India Pale Ale, was brewed by the Newfoundland Brewing Company alongside their India Pale Ale. Both existed, but, as I understand, this was the lighter version. Generally people I’ve talked to describe it as a sweeter lager. 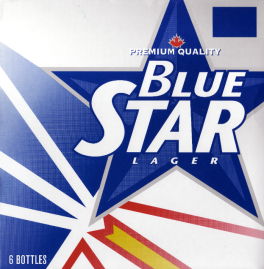 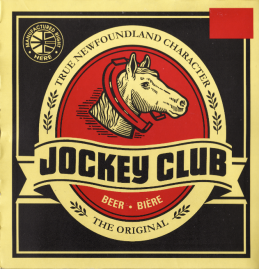 Labatt bought the Bavarian Brewing company and still brew two of their brands, Blue Star and Jockey Club. These are the two that I find the most distinct. As a lager, Blue Star is light and clean tasting, while Jockey Club (which is still a lager or, if it is an ale, a lagered or very light one) is slightly more flavour-full. Jockey Club was advertised as the “champagne of beers” back in the Bavarian days, and, if you look really hard, you might pick up notes of cheap sparkling wine. Blue Star has a big dedicated following, particularly vocal since it was rebranded with the Newfoundland Flag in the early 1990s, while Jockey Club is often considered a bit of a joke. In two rounds of blind taste tests between these five beers I ended up preferring Jockey over the others (I usually drink double IPAs and Imperial Stouts), so take that for what it’s worth!

The best for last. Not that it’s the best beer, but the 2010 redesign of Black Horse is really interesting for a historical point of view (the horse, which is the iconic part and on many labels on this site, now has a Newfoundland and Labrador shaped shadow on its body right before the hind legs). I mean, Black Horse Ale, as a brand, was one of the biggest in North America. It’d put Molson Canadian to shame. The Newfoundland version (which came with Carling-O’Keefe in 1962) has changed from an ale to a “premium” lager (more on this here), but the iconic black horse is still proudly on the label. It’s one of the most interesting to me, especially as they proudly say “Brewed only in Newfoundland and Labrador” when really it’s a mainlander who came here in the 1960s. There is no way you know his grandfather.

Those are the five current Newfoundland Beer Brands made by Labatt and Molson. I should note that O-Keefe Extra Old Stock was discontinued here in 2009 (it’s another beer of mainland origin), so that’s not included. These beers are great reminders of the brewing heritage in Newfoundland that was deeply rooted in independent brewers. While they might not be exciting to beer-geek tastes they are something to try when your here. If you do see them anywhere else in Canada it’s likely because of a high concentration of Newfoundlanders (like in Alberta) who still swear by their favorite brands. Will they ever get wider distribution? It’s doubtful, but then again, Labatt’s nostalgia brand in Nova Scotia, Alexander Keiths, is now a North American faux-craft beer, so anythings possible. But if you are here and looking for beers to drink be sure not to forget our craft brewers! They are writing the future of beer in Newfoundland.