Beermats are an under appreciated art form. So under appreciated, in fact, that I had almost forgotten I had been working on collecting together a few Newfoundland Beermats. Sitting down last night with Nicholas Pashley’s Notes on a Beermat finally jogged my memory and, well, here we are. Apologies to Mr. Pashley for the title.

In this post I have two sets of Beermats to share. One is a great set of Black Horse mats produced for the 500th anniversary of John Cabot’s “discovery” of Newfoundland in 1997 shared with me by Steve Shorlin and the other is an older set from Bennett Brewing which I purchased last summer. Both sets partake in something that is quite common in beer advertising, but worth noting again here. They both try to build themselves into Newfoundland’s history and sense of place.

The historians E. J. Hobsbawm and T. O. Ranger have called this kind of marketing (for the lack of a better work) move as an “invented tradition.” A tradition is invented, they argue, when something seeks to come off as very old – something that tries to write itself into the past – without actually being very old at all. They cite the kilt as a primary example, which, they argue, was built into Scottish culture in the 1800s by English fabric merchants. That’s their argument, not mine! For a less controversial point, let’s look at some Black Horse Coasters.

“The Unofficial Brew of Cabot’s Crew” series of coasters snuck the iconic Black Horse into various Newfoundland scenes like (above) in Bonavista and (below) on top of Cabot Tower on Signal Hill.

The Black Horse, it seems, has been everywhere in Newfoundland! From an iceberg in Twillingate to playing coxswain in the St. John’s Regatta.

This series was accompanied with a slogan “500 Years of Horsin’ Around” where Black Horse did its part to provide Newfoundland pub trivia and language lessons.

Steve has more of these over on his Flickr, so if you like them you can find a few more there. Now, back to what I was saying about “invented traditions.” As readers of this blog know, Black Horse was a major mainland brand for many years, so having a brand so associated with Newfoundland’s past strikes me as inventing the tradition of Newfoundland Black Horse. Black Horse was, as these beermats attempt to prove, not just another brand: it was a Newfoundland brand, through and through. (The Thoroughbred!)

These pictures were also on Black Horse bottles. Steve Shorlin, 2013.

The idea of an “invented tradition” works better when we get to the Bennett Brewing coasters. I’m just going to post all 6 coasters now and we’ll get back to talking about them after.

This is the image on the back of each beermat. Chris Conway, 2013. 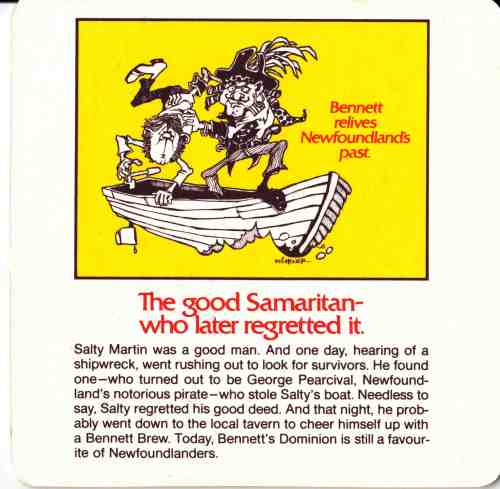 I maintain he was out there geocaching.

With all the talk of “Newfoundland tradition” in the coasters, and the line “Bennett relives Newfoundland’s past,” it’s a little easier to see what I’m trying to get at with the “invented tradition” thing. I doubt many of the stories actually ended with a Bennett Beer or that Bennet Beer was that widely available at the time. Most of the stories seem to be based off the ones found in the The Treasury of Newfoundland Stories, which itself was produced by Maple Leaf Mills Limited (now just Maple Leaf). The coasters were sold in a pack of 6, as we can see from the advertisement below from the Dominion Ale Songbook (of which I have more to say on in another post).

If I ever make an NL Beer History beermat, it will steal that line: “A bit of our past to put under your glass.”

“A real collector’s item” indeed! I picked my set up, still in their plastic wrap, in St. John’s last summer. I sadly had to open the pack to scan them, which I guess is for the greater good. It seems, since we don’t have the stories listed in the advertisement, that there is another set, or at least another few, coasters out there which I’d love to track down. Either way, the stories and the images (by cartoonist Ted Michener) are pretty fantastic.

Beer seems to be one of those things that always wants to make itself more familiar to its drinker. Breweries strive to make their beer one that has a sense of place even if it’s owned by Carling O’Keefe (as Dominion was in the 1970s) or Molson (as Black Horse was in the late 1990s). Where Dominion’s advertisements seemed aimed at regaining local confidence and their Newfoundland identity after their takeover by a multi-national, Black Horse’s seem to represent a beer trying to become the icon of Newfoundland. Both worked to etch themselves into the culture of Newfoundland through carefully purveying history alongside with their beer. Of course, the result of tradition-inventing are brands which did take on real meaning – and which already had real meaning – to many drinkers. For me, a big part of the fun of history is finding out how these meanings came into being.