Any Mummer’s ‘Lowed in?

Hark, what’s that noise, out by the porch door?
Dear Granny, there’s mummers, there’s twenty or more.
Her old weathered face lightens up with a grin.
“Any mummers, nice mummers ‘lowed in?” 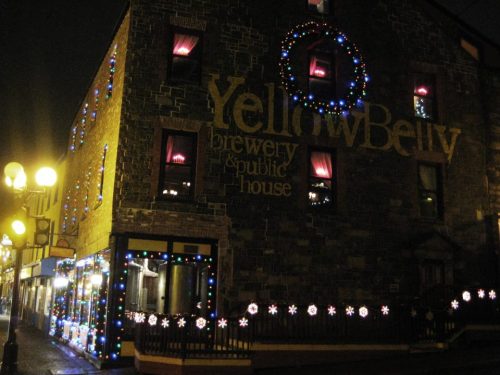 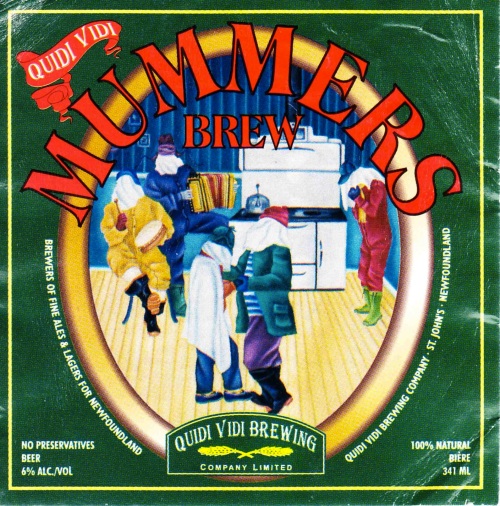 Originally featuring a Newfoundland Mummer’s party – a night of dressing up and touring around the community dancing, drinking, and playing music – the label has now been modernized to fit in with their new streamlined packing design. Its available on tap at a few places in the city (I’ve had it at Christian’s on George and the Duke of Duckworth so far) and it’s also in 6-packs at NLC locations and at the brewery (which is also beautifully decorated for Christmas)!

The other seasonal beer brewed up for Christmas is Yellowbelly’s Mummer’s Brew. I know – I know – there are only three craft breweries in Newfoundland and two of those three have made a Christmas seasonal with the same name… Go figure! Yellowbelly’s Mummer’s Brew first appeared in 2011 when it was a quite tasty spiced Winter Ale. This year (2012) it has changed to a 7% Chocolate Porter. Its available down at the brewery on tap and in bottles, which you can also find at NLC locations.

I should mention that Storm’s Coffee Porter has long been a Christmas tradition for me. It’s their Winter seasonal! (See my post on Storm for more about them!)

Oh, I suppose you fine mummers would turn down a drop,
Of homebrew or alky, whatever you got.
Sure the one with his rubber boots on the wrong feet,
needs enough for to do him all week.

As the first year comes to a close for the Newfoundland Beer History Project, I’d like to say thank you for everyone that’s shown encouragement for this project and who has shared in my interest in learning about Newfoundland’s beer history! Over 10,000 people have checked out this blog in this first year and I’ve got a lot more planned for the future. I hope the holidays treat everyone well and that good beer can find you where ever you are!