I love adding more historical Newfoundland beer bottle labels to my collection and this one is no exception. Today I finally got a copy (two actually) of this Jockey Club label. 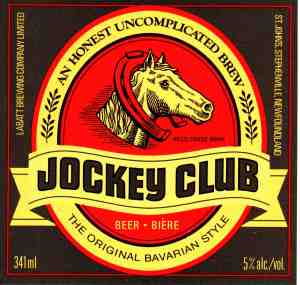 The site I picked this up from states that its from the 1960s and was old stock that was never used. The date seems to be fairly believable (at least for our purposes), as it would be after the 1962 buy-out of the Bavarian Brewing Company Limited by Labatt, however, because the label lists Stephenville as part of the Labatt’s brewing organization this is likely from the 1970s.

Labatt took control of the old Bison Brewing Company brewery in 1974 and operated there until 1981, so it’s probable that this label comes from the late 1970s when Labatt had two operations in the province.

Dating the label aside, from my understanding this slogan “An Honest Uncomplicated Brew, the Original Bavarian Style” (which is great, isn’t it?) was used from the 1960s until the early 1990s when it was changed to “True Newfoundland Character” (this would be around the time Labatt rebranded Blue Star to be adorned with the Newfoundland Flag and ran the “Shining Star of the Granite Planet” series of advertisements”). I like to think that the “Bavarian Style” they are referring to has more to do with the Bavarian Brewery, who they inherited the beer from, rather than the area of Germany where the Bavarian Brewery got its name. Either way, it’s a great label which I’m quite happy to have a copy of!

One response to “Jockey Club: An Honest Uncomplicated Brew”